SPACECRAFT PRESS O27: “THE TRAVESTIES OF PLATO” BY SEAN CEARLEY 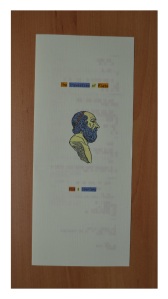 Spacecraft Press is proud to announce the publication of Sean Cearley’s The Travesties of Plato. A total of 30 copies were produced, 15 of which are for sale.

To create The Travesties of Plato, poet Sean Cearley subjected ten of the philosopher’s famous dialogues (from Jowett’s 1871 translation) to the ‘Travesty generator‘, an online tool for converting text according to poetic formulae derived from the tenets of literature movements such as Dadaism. Cearley also “compressed” the original text using the travesty generator, limiting the transformed version of each dialogue to 400 characters. After this output was generated, the resulting text was imported into a spreadsheet, with each word in the poem in its own cell. Cearley then applied Colors according to the structure of the words.

Sean Cearley is a former professor of philosophy and A.I. researcher in computer-derived writing. He currently lives eight inches above a river watching ducks and herons in between salmon runs. His major influence is from the background of human-computer interaction, each entity learning from the other and forming new methods of creating imagery in both natural and synthetic minds.

The Travesties of Plato is available for $3.00 including domestic postage (+$1 non-Canadian postage). To order, please contact Ken Hunt at jkchunt@hotmail.com. Paypal is preferred. Money orders in CAN dollars are also accepted.